I don’t make many t-shirt quilts, but occasionally I make an exception. Will’s Cherished Childhood Memories was made for Will Herbert. The quilt begins with a  t-shirt  from his day care school and ends with his college choice the United States Naval Academy. Because he is a swimmer, I chose a blue background for his quilt.

I thought it turned out nicely. I hope he loves it or at least, I hope he appreciates a Mom who would have this quilt created for him.

I did a similar quilt for his sister. It is called Meredith’s Cherished Childhood Memories. 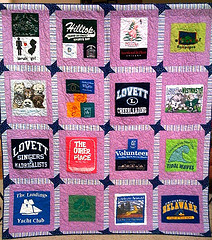 I am a passionate quilter who also is the general counsel for a major urban county in Georgia. I manage to pursue my triple passions of motherhood, quilting and traveling.
View all posts by ovbrantley →
This entry was posted in A Quilter's Life, Collector's Corner and tagged African American quilter, fabric art, Meredith's Cherished Childhood Memories, O.V. Brantley, patchwork, quilt, t-shirt quilt, wallhanging, Will's Cherished Childhood Memories. Bookmark the permalink.