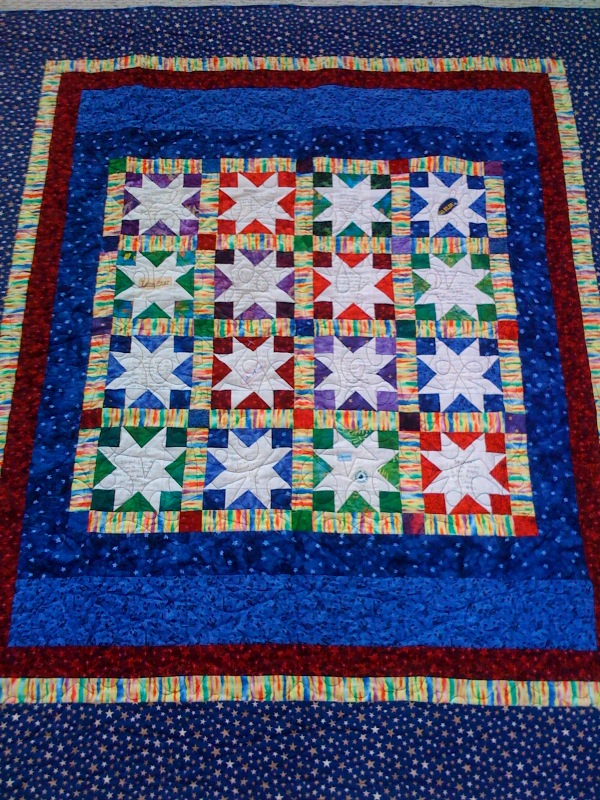 A season that exceeded expectations ended for the Lady Lovett Lions Tuesday night. The Model Lady Blue Devils with five starting seniors proved to be too experienced  for the young Lovett Lady Lions. The Lady Lions entered the season with a goal of winning more games this year than last year. They more than exceeded their goal by winning twice as many games this year and by reaching the Sweet 16 of the State Tournament.

As noted in a previous post, the Lady Lions only had one senior on the team this year. Because of her exceptional leadership and refuse to quit attitude, Elizabeth Selman earned a quilt in addition to the other awards she will no doubt get for being the team captain.  She has no idea she is getting a quilt, but I am going to give  you a peep. I know you can keep a secret, right? India and I were very crafty and managed to get all of her  team mates and coaches to sign a star without so much as a hint to Elizabeth. It is called She Looks Really Good in Blue. I have no  idea why, but India said that had to be the name of it. Some sort of teenage secret that involves a boy, no doubt.

I am a passionate quilter who also is the general counsel for a major urban county in Georgia. I manage to pursue my triple passions of motherhood, quilting and traveling.
View all posts by ovbrantley →
This entry was posted in A Quilter's Life, My Life as a Mom and tagged African American quilter, GHSA Girls Basketball, girls basketball, Lovett School, O.V. Brantley, patchwork, quilts. Bookmark the permalink.